Back to all Posts
What I Learned at the PACCARB Meeting
Posted in Advocacy, Antibiotic Overuse, Community, Education, Patient Safety, Video
by Christian

On June 20, I went to Washington, DC to attend the Public Meeting of the President’s Advisory Council on Combating Antibiotic Resistant Bacteria (PACCARB). PACCARB was established by the Obama Administration to provide expertise and advice on the implementation of the National Action Plan for Combating Antibiotic Resistance. Importantly, though PACCARB is largely managed by the Department of Health and Human Services, both the Department and Agriculture and Department of Defense are involved; the latter because antibiotic resistance is considered a national security threat.

Peggy Lillis Foundation has been engaged with the National Action Plan since it was released in 2014. I attended the first White House Forum on Antibiotic Stewardship in June 2015, as one of only three patient advocates. Coincidentally, PLF honored Dr. Martin Blaser – chair of the PACCARB – at our 2012 FIGHT C. DIFF Gala. Dr. Blaser later included Peggy’s story in his groundbreaking book, Missing Microbes. My friend and fellow patient advocate Alicia Cole is the sole consumer representative on the council. As a survivor of multiple healthcare associated (and antibiotic resistant) infections, no one is better suited for this role than Alicia.

PACCARB’s meetings are open to the public. Anyone can register to attend a meeting and give public comment. I hadn’t attended the previous two so I was very curious and excited to attend this one and to have a chance to share PLF’s perspective.

Overall the meeting had a lot of interesting content, and the council members and presenters were very engaged and knowledgeable. In particular, the first day had an array of presentations on how to incentivize the development of new antibiotics while ensuring their judicious use from government officials, industry executives and international experts. In particular, Professor Kevin Outterson of Boston University gave a fascinating talk highlighting what he called “The Antibiotic Tripod” of policy development: 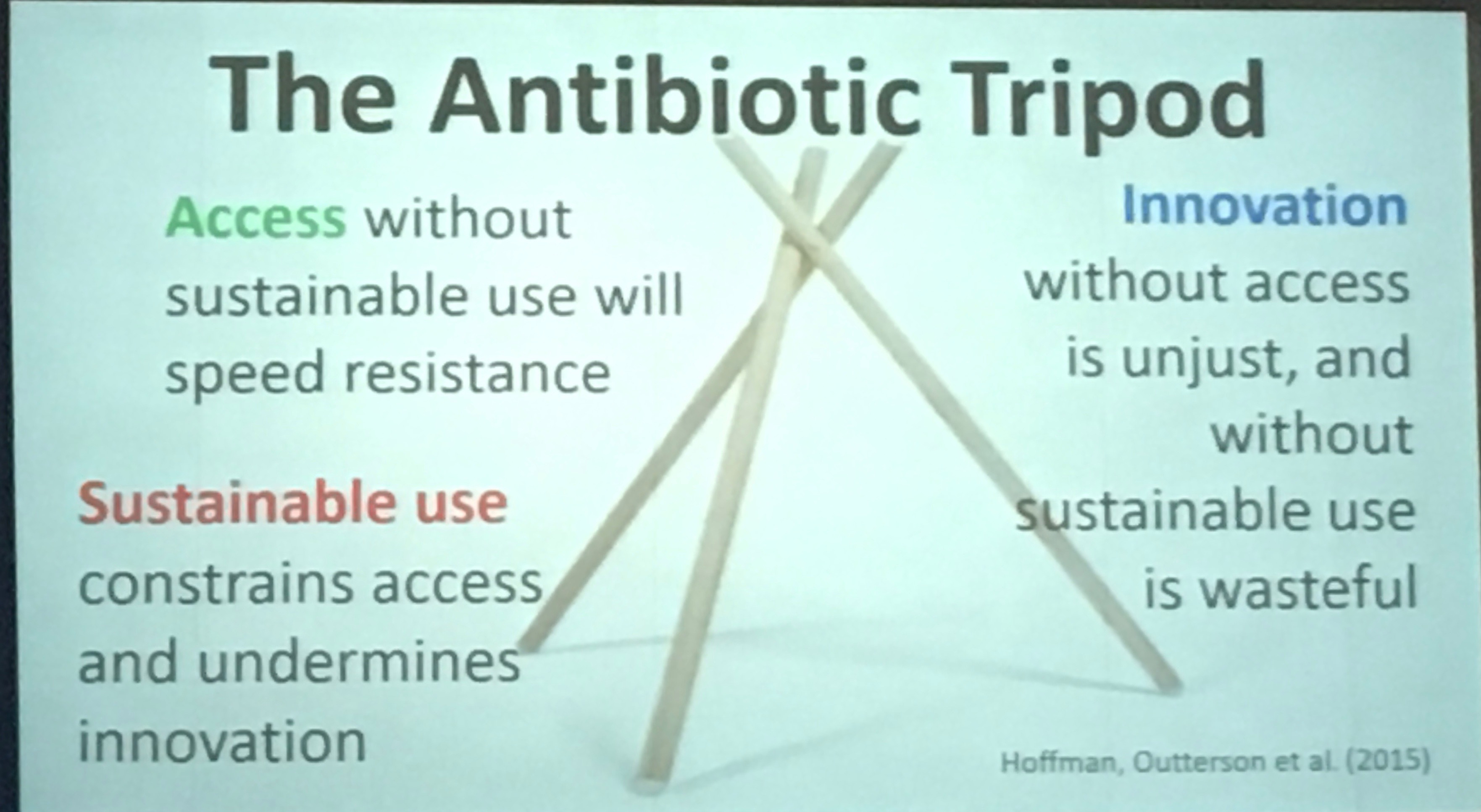 The policy tripod is an interdisciplinary approach to tackle rising antibiotic resistance including access to healthcare for underserved communities, conservation of existing and newly developed antibiotics and innovation to ensure the pipeline keeps ahead of resistance. You can read more about their approach in this paper, What Will It Take to Address the Global Threat of Antibiotic Resistance?

Dr. Sam Bozzette of bioMeriuex shared insights from the diagnostics industry, including the surprising fact that over 60% of medical decisions are based on in vitro testing which only takes up 2-3% of healthcare spending. Given the importance of good testing to an accurate diagnosis and the appropriate treatment, this seems like an area where we’re under-spending. Particularly in the area of infectious disease, the number of antibiotics prescribed without laboratory confirmation is shocking. Perhaps more testing would decrease the overuse of antibiotics.

Toward the end of the first day, PACCARB member Sherrie Dornberger, who leads the National Association of Directors of Nursing Administration in Long Term Care, shared her own story as a patient harmed by multiple antibiotic resistant infections. I cannot do her story justice but it was horrifying and a testament to her strength and determination that she continues to work on behalf of nurses and patients.

That evening PLF co-hosted a screening of the documentary Resistance at the Milken Institute of Public Health with Consumers Union Safe Patient Project and the Antibiotic Resistance Action Center of George Washington University following by a panel discussion with me, Lisa McGiffert of CU and Dr. Lance Price of GWU. Peter Eisler, the excellent reporter, moderated the discussion. 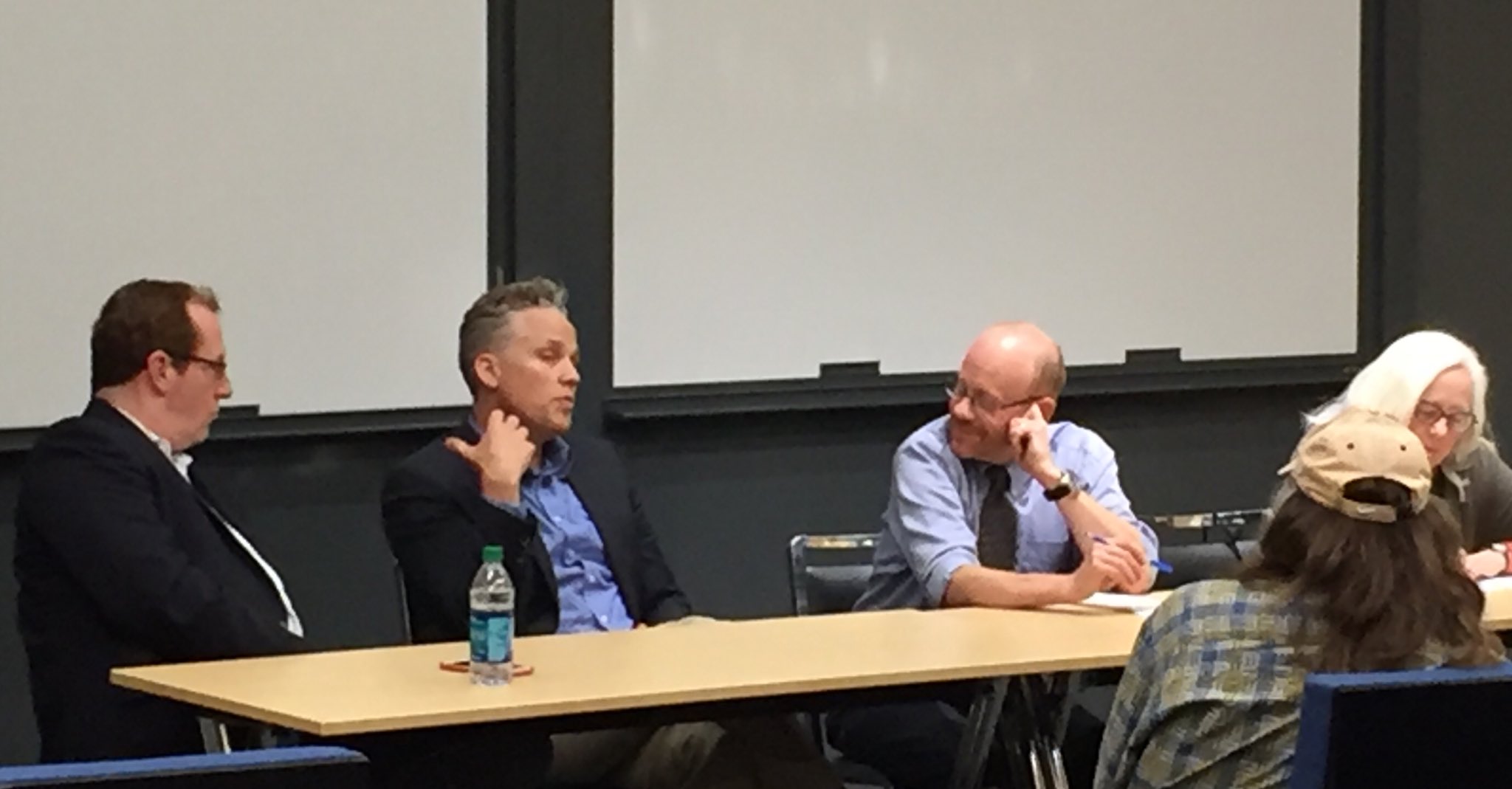 The second day featured presentations by experts on antibiotic-resistant bacteria in the environment. While much of the science went over my head, the degree to which antibiotics are leaching into the environment is frightening. For example, Dr. Timothy LaPara of the University of Minnesota spoke on the role of wastewater treatment on antibiotic resistance.

While the meeting was interesting and I was able to make a comment, there were aspects of it that I was less enthusiastic about. In particular, there was very little “public” in the “public meeting.” Sure, anyone could attend and register to make a comment. But comments are limited to two minutes at the end of each day. Most attendees were representatives of a variety of stakeholder groups as opposed to average citizens. There was no opportunity for those of us who were representing consumers and patients to question the presenters or council members.

In my comment (video below), I urged the council to more broadly and deeply engage the public.  Please watch the video and tell us how you think the public should be involved in the comments section.