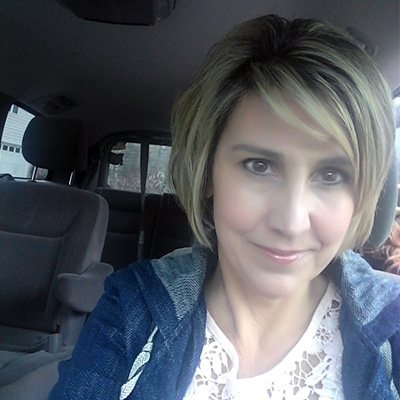 My struggle with C. diff began in January of 2013. I had been suffering from chronic diarrhea and weight loss, as well as severe pain and nausea. Like most people who have never heard of C. diff, I thought I had contracted a stomach bug. Well as the days turned into weeks, I went to my local primary care physician. He thought maybe with my depression and anxiety I had an ulcer so he sent me a referral to a gastrointestinal (GI) specialist. I saw the GI in February. He poked around on my stomach and asked if anything hurt. Yes, it did, and I was doubled over in pain. He wanted to order blood tests for Crohn’s, gluten allergies and get a CT scan—while mentioning the words “small intestinal cancer.”

The blood tests took weeks to get results back, and I was scheduled for the CT scan with contrast. As the days went by, the pain was getting worse. The weight loss was now at 20% of my total body weight, and I was struggling to work and be a mother to my children. After the scan still showed nothing, I was told to modify my diet. I then sought a second opinion with another GI specialist. When I made the appointment, they asked about my symptoms and ordered stool tests, including a C. diff test. Well the next day was my appointment, and I had turned in my stool tests, and as soon as the doctor came into the room, she said, “Well I know what is wrong with you, you have C. diff.” I asked, “I have what?” She went on to explain that people who have taken antibiotics that can alter their good flora in their gut can get this infection. But no worries, a ten-day round of Flagyl would fix me right up.

At this point I had been suffering for five months with C. diff without treatment. I immediately told her I had not been on antibiotics for years! How did I get this? She stated that some people can catch it through community contact, and maybe that was where I got it. So, off I went with my script of Flagyl and a standing test for C. diff after I finished the course of medication.

After three days of Flagyl I thought I was dying…I was on the floor of the bathroom unable to keep down fluids; the pain was mind blowing. I was trying to think it must get worse before it gets better, and I pushed through and finished my round of Flagyl. Needless to say, I still tested positive. So, onto a round of Vancomycin—this medication was promising to me as the answer. And again, I spent two weeks of complete hell on it, and I was back with a positive stool test.

So, my GI specialist decided she wanted a colonoscopy done to take a look inside. So back on a longer dose of Vancomycin I went, and I was scheduled for a colonoscopy. The prep was brutal, she saw much damage while in there, took another sample and it was still positive.

When I came out of recovery that day, it was the first day I was told about a fecal microbiota transplant (FMT). She said we weren’t there yet, and we had one more medication to try: Dificid. She ordered it, and I started it three days later. She stated she had never had anyone fail on Dificid, but if I did, there was nothing more she could do for me. I would then need an FMT. “Well where do I get one of those?” I asked She stated not many doctors in our area did them, and we would cross that bridge when we got to it if I failed on Dificid.

So, then it was the end of October, and I was ten months into this illness. I failed on Dificid, and my doctor sent me to a large hospital to get an appointment with a GI doctor who indeed did FMTs. So, I waited (on no medication mind you) for the new GI doctor to call me. Days turned into weeks, and my body was shutting down. I knew it, my family knew it, and I felt no one was going to help me. At that time, I realized I may die from this illness.

I decided to pull a last-ditch effort and went to the emergency room of the hospital where I was trying to get an appointment for the FMT. When I arrived, I said, “I have C. diff, and I need an FMT. Here are my records and what treatments I have gone through.” I don’t remember much after that. I was admitted to the critical care unit of the ICU with a heart rate of 180, blood pressure of 60/30, a body temp of 96 degrees, and a potassium level of 1.9. The doctors told my family I was septic and may not survive an FMT. But wait, the FMT was my only hope!

So, they stabilized me the best they could. I was sent to the endoscope lab for an FMT via nasogastric (NG) tube. They said I would survive the prep for an FMT via colonoscope. Two weeks before Thanksgiving I got my first FMT, and two weeks later—still an inpatient—I received my second FMT via colonoscope as the NG tube route had failed. I was told they had never had to repeat FMTs, and they were at a loss. My C. diff was resistant, it seemed, to all treatment.

Well that second FMT finally provided me with a negative stool test, and after ten more days of inpatient treatment, I was released before Christmas. I had not seen my four children, and I was a pitiful 108 lbs (down from 140 lbs) on a 5’5” frame. I had lost all muscle mass in my body, my skin hung off my frame and I was diagnosed with post-infectious irritable bowel syndrome (PIIBS). The diarrhea continued.

So, for two-and-a-half years I suffered from post-traumatic stress disorder and PIIBS. I took anti-depressants, anti-anxiety medication, and tried to live with my new normal. Every bowel movement or pain brought me to my knees thinking it was back. I moved to North Carolina on November 18th, 2016 to get remarried and begin a new life. I was hopeful that I would remain C. diff negative. I had not taken antibiotics and was so careful with germs.

As I was planning my wedding and starting a new job, I noticed changes in my stools again. I thought, “No it cannot be. It’s not C. diff, its stress! Yes, it must be stress. No, I won’t think the C. diff is back.” So, for weeks I walked bent over from the pain, lost weight at a rapid rate, and tried to figure out how to explain this illness, if it was back, to my fiancé. Who wants to talk about poop to the person you are marrying? I certainly didn’t.

But as much as I tried to ignore what I already knew, on March 3rd of 2017, armed with my medical records and a stool sample (I had a backlog of the cups to take them), I went to a local ER and said, “I think I have C. diff. I have received two FMTs in the past, and I know I need another one. Please help me.” I was severely dehydrated, once again had low potassium, and had lost fourteen pounds in two weeks. They ran some tests, and after being given a Vancomycin taper, I was sent home prior to the test coming back the next morning. The phone rang, and the nurse stated the next day, “You are positive for C. diff. Here is a phone number for a GI in the area, you need to be seen by them.”

I went to my Facebook group where I had found solace the last three years and decided no way was I going to go blind into my treatment again. So, I went to the Peggy Lillis Foundation and went to the part of the website that had the list of FMT providers by state. There were three listed in North Carolina. So, I called the first one. He was at Duke. I got an appointment and was told, “We don’t do FMT anymore, but there is a clinical trial for poop pills we can try to get you in.”

Well once again the days turned into a week, and I was panicking. I knew what was happening and my wedding was a month away! My dress fell off me, I tried to work, I was back in the ER for fluids every five days, even once by ambulance after I passed out in the parking lot of a local Walgreens. So, I went back on that website armed with my medical records beside me, and I called the next doctor, Dr. Elliott in Burlington, NC—one-and-a-half hours away from me. I said, “My name is Mia, and I need an FMT! I can scan you my records, and I need your help, please!” That nurse said, “The doctor is right here, send your stuff to me, and I will call you right back.” Within five minutes, I had a call back and appointment the next day. I wept…I wept knowing that I needed this to work, and I wanted my life back.

Dr. Elliot scheduled me for an FMT via colonoscope fifteen days later. I took Dificid for ten days prior, stopping two days before my procedure. On March 27th 2017, I received my third FMT. The staff treated me with more dignity than I had felt in a long time. I left after six hours with hope that this would be the answer again.

We were not supposed to test for six weeks, but after a few good days, I was put back on Dificid because my symptoms seemed more than just PIIBS. My life will never be the same as it was pre-C. diff. I lost so much the last three years. I know the statistics of it reoccurring are high for me. I live it day by day. I am not able to eat what I used to. I keep children’s pullups under my sink at home. I have learned a new normal. I keep telling myself there is a reason I am here today: if I can help one person, give one medical professional an insight into how to treat us and how to listen to us, I will not stop spreading the word. I will talk the uncomfortable talks about bowel movements. I will not stop until there is a new standard for care for this illness. We deserve it.

We deserve to go through life without the sheer fear after every bowel movement, after every gurgle of our stomachs, after every pain we feel. C. diff has taken so much from me and those who fight with me. I won’t let it take my life, not without one hell of a fight. On April 15th 2017, I will marry my best friend. The vows through sickness and health will have new meaning after what we have been through the last six weeks. But I will be standing there alive, my family with me. I will be there because of this Foundation and the tools it has given each of us to fight another day.