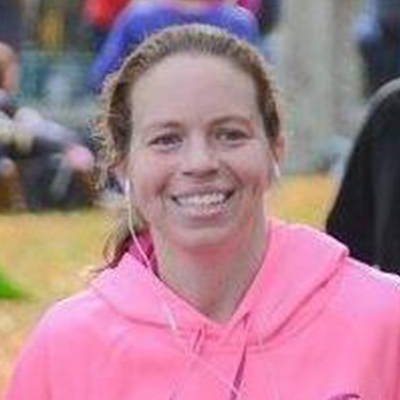 In March 2011, I had my gall bladder removed due to it being infected and full of stones. I believe this is where my issues with C. diff. started. I was on a surgical unit in the hospital. I had antibiotics. As soon as I got home the diarrhea began. Doctor after doctor attributed it to not having a gall bladder anymore. I tried all the drugs but I still would have 5-7 watery bowel movements a day. This went on for a year. I had several colonoscopies and EGDs that showed inflammation throughout the GI tract and one that showed a candida infection in my esophagus, but no one ever said the inflammation was Crohn’s or colitis. So I struggled for a year. I lost 10 pounds in that year. I had two small children who were missing out on having fun with friends because I couldn’t go anywhere for fear of having an accident in the car.  I finally made an appointment with a womens GI specialist in Providence. She was booking far out and in the meantime one night at work I came down with severe diarrhea, nausea and vomiting. It was a LONG ride home. I called in sick to work that weekend and spent Saturday and Sunday between my bed and couch. At one point, my son found me lying on the bathroom floor and I remember him yelling “Daddy, Mom’s sleeping on the floor!”. Most of the rest is a blur.

My husband brought me to the hospital the 3rd day of those symptoms, which I just assumed was a flare up of my “gall bladder diarrhea” (at this point I totally forgot that about 2 weeks earlier I had been on clindamycin for a root canal). I figured the ER would just give me fluids and send me on my way. They couldn’t get an IV in so they did an abdominal CT scan without contrast, which showed my entire colon was inflamed and thickened. They diagnosed me with colitis, either inflammatory type or infectious, they weren’t sure yet. They wanted to put a central IV line in my neck because they still couldn’t get an IV in but at that point I had a mini meltdown and just cried to go home. They had me take some Ativan under the tongue and once I was sedated (or knocked out rather) they fished and were able to get an IB in.

Bloodwork showed a fierce infection and liver enzymes were all out of whack. My liver and spleen were also enlarged. So I was admitted. I assumed I’d go home the next day; no one stays in the hospital for long any more! I told the admitting doctor about my history of diarrhea. They put my on IV fluids with potassium, IV Flagyl, and I tried to get some rest. The next day the GI doctor came in and told me my stool was positive for C. diff. I didn’t know if any doctor prior had ever tested me for this, and he said I was not your typical C. diff. candidate, so maybe not. He assured me a day or two on Flagyl, and I’d be good to go. My brother was kind enough to email me an article about a new treatment for C. diff., fecal transplant. I thought it was the most disgusting thing I’d ever heard of. Oh, was he wrong. About day 4 or 5 into the hospitalization I felt worse. I was so weak. They changed me to oral vancomycin.

The nurses wanted me to call them when I needed to go to the bathroom so they could help me but when I had to go, I couldn’t wait for them to come all the way down the hall to the isolation room and gown up. I had to go…NOW. So, I do remember once crawling there. It wasn’t pretty. I felt like I was getting worse not better. I was still having severe projectile vomiting and diarrhea, even on just liquids.The morning of day 6, my 4 year old son was admitted to a different hospital. Now I was really a mess. My 2 year old daughter was being shuffled to different family members, my son was at Hasbro in Providence and I was in a hospital in a different city.

I was alone and scared I wouldn’t get to go home and see my children, and my son needed me. So I knew I needed to get better. I begged them to let my try and eat something, anything. I was sure if I had something to eat the nausea and intense headache would go away. Well, I still vomited and had diarrhea, but at least with something in my I started to feel a bit better. It may have been around this time they also had to give me IV magnesium; even on all the meds, I was still dehydrated and my electrolytes were crazy. Finally on day 8 I was sent home. I begged. I needed to see my children and let them see I was okay. So, very weak, I went home. I was given another 14 day course of oral vanco. At this point I was still having diarrhea maybe 5 times a day. So the following week I had a regular follow up with my hematologist (I’ve been severely iron deficient pretty much since the whole diarrhea things started and have had to get many IV iron infusions).

I was still having much diarrhea and was dehydrated and fainted while I was there, so they brought me to the ER where they did another C. diff. test. They called on the way home and said it was indeed positive, but that I did not need to be admitted unless I really wanted to (no thank you). So more vanco. The following week I had a follow up with the GI who saw me in the hospital. I still felt horrible so he changed the dose on the vanco and gave me 3 refills in case I needed them. I thought to myself, “Three refills?!” I didn’t want to need them! I wanted this to go away. My poor children were watching me basically die. My husband had to take off much of the summer to care for them and me. I couldn’t go anywhere because I was afraid of not finding a bathroom in time.

Finally, maybe 2 weeks after that, the appointment with the GI in Providence came around. I didn’t even talk to her about the year long battle with diarrhea, just the C. diff. She was surprised no one had done the tapering course of vanco yet, so we did that. She did a scope and it showed mild inflammation. I then had many follow ups with her nurse practitioner and she kept mentioning I should see Dr. Colleen Kelly for a fecal transplant. The idea still grossed me out. After repeatedly seeing the nurse practitioner I was convinced and I emailed the study coordinator for Dr. Kelly’s study. Her office was amazing and got me in very quickly. My husband came with me because if I was going to do this he’d be my donor. She said I was a perfect candidate for her study, but too sick at that point; we didn’t want me to risk getting any worse. When I was slightly better, she signed me up for a fecal transplant, and that was that. Until my husband’s stool came back positive for C. diff. So the procedure was cancelled.

My mom volunteered to be my donor, so we began the screening with her. She tested fine. Then they said I had to go in in just a couple of days. I was excited, nervous! When I went, Dr. Kelly (who is THE most compassionate doctor I have ever met) explained the FDA’s stance (this was back in November 2012), and she had to file an emergency IND application for me. I can’t believe she did that for me, someone she didn’t even know. She had to do so much extra work for it. I am forever grateful. The procedure started, and while I usually fall right asleep during colonoscopies, I was so worked up I remember watching the whole thing on the screen. It was amazing. I was able to hold it in for just about an hour. I went home. Felt fine. And have felt fine since. Some minor irritable bowel, but nothing that’s unbearable. Dr. Kelly is amazing. My kids finally have their mom back. My husband has his wife back. My mom didn’t have to see her daughter die. I am so thankful I was able to get into Dr. Kelly’s office and get the procedure when I did. I can’t imagine being one of the patients who need it now and cannot get it because the FDA’s decision.

As a pharmacist, I feel most of the drugs I dispense have more potential side effects than someone else’s feces!  And it was a drug that started this all for me…My family just came back from Disney World! I would have NEVER been able to do that trip any time in the last 2 years before my transplant. I am so very thankful.