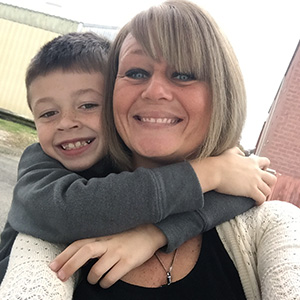 There’s so much more to my story, but this is the quick version. I’m still sick at this moment, and I am at a loss as to who to turn to if my doctor won’t respond to me. I am scared. I have a little boy and feel like—thanks to C. diff—I’ve seen death flash before me. I’m only 36. This is crazy!

My name is Jessica, and I have C. diff. I’m honestly not sure if this is the second time I have had it or if I never actually got rid of it the first time. It seems to me that health care providers in my area lack knowledge. Three-and-a-half weeks ago, I started feeling really sick. Head to toe soaking wet from sweat and the worst pain of my life. Nauseous, puking, coming out both ends. In the last three-and-a-half weeks, I’ve been to the emergency room four times and admitted to the hospital twice. The first time I went, they never tested me for C. diff even though I had had it previously. They said I had a urinary tract infection (UTI) and admitted me. I felt way sicker than any UTI, and my entire body hurt with most of the pain radiating out of my gut. I couldn’t stop puking, and my stool was bloody.

By the time I had finally gone to the hospital, I was already on day three of being sick. By this point, I was hallucinating, I hadn’t eaten anything and could hardly even drink water. I had to have fluids, six bags of potassium, and they gave me two different antibiotics. I got discharged even though I still wasn’t feeling great. I was still sick as can be.

A day later it got worse. The next day, I was so sick that I could hardly stand. The hospital said if my symptoms worsened, I should come back…so I did. I was treated like absolute garbage. At this point, I still wasn’t sure what was wrong, but the nurse and doctor both accused me of seeking medication. Very, very rude. All I could think was that I was seriously going to die and no one cared. It hurt so bad. I was tired and weak. I felt helpless. I went home and had the worst night of my sickness.

The next day, I called my family doctor (who refused to return calls or send me to a specialist), and she finally ordered a C. diff test. It came back positive. That night was another bad one. I had a doctor’s appointment the next day, and I didn’t feel like she took me or the infection very seriously. She told me that if I didn’t feel better by Monday, take the other antibiotic she called in for me. This was on a Wednesday.

By Friday I was in more pain than I had been previously, and I felt much worse. I was on my third straight day of no sleep and the worst pain of my life. I couldn’t stop heaving and feeling like I had to go. That Friday I dropped my boy off at school and went back to the emergency room. I told them I tested positive for C. diff. They didn’t take me seriously. They took labs and realized everything was off, and I was admitted again. This time I got fluids, antibiotics, and twelve bags of potassium. I was discharged two days later and kept getting sick.

The first time I caught it was in the hospital, and they discharged me to go home with my little boy while I was puking and pooping blood. I left there and went to another hospital where they tested me and quarantined me for a week. The awareness in my area stinks!

I have tried to call my family doctor every day for the last two-a-half weeks. I have left messages every day, and I still haven’t been able to pick up my antibiotic because the pharmacy says they need a pre-authorization from my doctor who won’t return my calls. I have lost fourteen pounds in three weeks, and I was only 131 lbs to begin with.

I can’t take it anymore. I have a little boy who needs his mom, and I can’t function when I’m sick. Some days are too much, and I don’t think I can do it anymore. My doctor refuses to send me to a specialist because then it would take money from her (she has been caught doing this in the past as well). She has no knowledge of C. diff and will not return my calls. The hospital says to call my doctor, and when I call my doctor, she says go to the hospital. What do I do?