I hung my head, resting my hands on my very pregnant belly, trying to calm the early contractions as our 22 month-old daughter lay in the hospital bed, terribly sick and afraid. Her little brown curls framed her sunken and pale face, acting as a grim reminder of home and the giggling girl I so longed to see again.

Those were some dark days.

Nurses, now in full isolation suits, filtered around the doctor while I tried to process the words that had just been spoken. 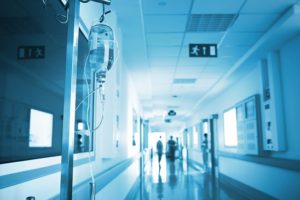 “Mrs. Fuhrman, your daughter Pearl has C. diff and she is very ill.”

My husband sat stunned and I stared defeated as the doctor’s words echoed through endless chambers of painful memories. I knew what my little girl was up against and it terrified me. This scenario was all too familiar because I had almost died from C. diff a year before her birth.

Our story starts with me, and unfortunately, my own abuse of a common drug. A miracle drug that has saved countless lives, but one that also carries great responsibility.

It was the summer of 2012, and I was happily planning my wedding without a care in the world. Dreaming of flowing veils, perfectly placed boutonnieres and my lovely bridesmaids flitting about me like little fairies in the woods, I closed my eyes as I sat in the dentist chair amused that not even a root canal could dampen my spirits. Upon leaving, I was handed a prescription for a broad-spectrum antibiotic which I gladly took without hesitation. Though I didn’t have an infection, I agreed that the antibiotics would be a good idea, just in case.

Little did I know, life would never be the same.

I had never given much thought to antibiotic use in my life. In fact, I was a frequent “user.” Any time I had a cold or flu, I headed straight to the doctor’s office and asked for a prescription. I certainly did not have the time to be inconvenienced by sickness and felt my body could use the extra help. I always felt better in just a couple of days and besides, what could possibly go wrong taking antibiotics?

A week later I was white-knuckling a chair, bent over from the pain in my belly while trying to one-arm wriggle into a bridesmaid’s dress for a wedding which began in only a few short hours.  This strange sickness had come upon me quickly, throwing me off guard. Advancing from overwhelming fatigue and a belly ache to the most painful, unimaginable diarrhea I could fathom, I kept trying to brush it off as I pushed through my hectic schedule.

One morning, I could hardly rise from bed and stared stunned while gaunt and hollow eyes looked weakly back at me in the mirror.

I had to go to the doctor.

I was quickly hospitalized and diagnosed with Clostridium Difficile, or C. diff for short, which is a life-threatening superbug intestinal infection affecting nearly half a million people a year, killing an estimated 29,000. The next seven months of my life were an

absolute living hell. During one of the sweetest times in my life, I lay dying in the geriatric ward. Instead of a blushing bride, I spent dark and lonely days in isolation rooms, sadly perusing the internet for my wedding dress, veil and shoes. I hardly made it out of the hospital in time to attend my own wedding. Our honeymoon to Sweden was spent instead in the hospital again, fighting for my life. There was no rest from my sickness. No peace. So how did I, a perfectly healthy young woman with no underlying diseases contract a deadly superbug?

Because, like many of us, I had an antibiotic habit.

Before this, I had never heard of the gut microbiome. I simply couldn’t fathom, that something as “safe” as antibiotics could disrupt the beautiful network of good gut bacteria that work in harmony to protect me from illness, chronic diseases and superbugs.

Here’s what science says about the disruption in your gut flora from frequent antibiotic use:

As a culture, we seem to be increasingly reliant on antibiotics. We medicate low grade fevers immediately and have little faith in our immune system’s ability to function. We assume that antibiotics give us something that we can’t acquire on our own: time. With everyone’s busy schedule, there simply isn’t time to be sick and we expect a magic pill to heal us.

Because of our antibiotic habit, bacteria is outsmarting us and growing stronger, causing antibiotic resistance.

I know all of this sounds scary, but it’s important to keep in mind. Once our lives were impacted by a superbug, trying to simply function was a nightmare and everything came to a screeching halt. I will never be able to relay the depression I felt in the hospital knowing I only brought sadness to my family and feeling as if I were no longer a contributing member of society.

When Pearl’s C. diff diagnosis came in, things felt even darker. As her mother, I did everything I could to protect her, including having a natural birth since this was an option with my healthy pregnancy. I breastfed her for 18 months, but none the less, the superbug found its way back to our family. The spores can live for a very long time and I wept so bitterly knowing C. diff, no matter how many times we bleached, was all over the house. I’ll never know for sure, but the consensus is that she acquired it from where should have been the safest place for her: our own home.

But we are the lucky ones, because we survived.

Our family is quite cautious of antibiotic use, but sometimes they are necessary.

When you become sick, work with your doctor and consider giving your body a chance to fight first before requesting antibiotics.

We all want what’s best for our health and that of our loved ones.  Antibiotics are truly a gift – think of all the lives saved – but with this gift comes great responsibility to use them respectfully and only when needed.  I am reminded of the saying that, “Nothing in life is free.” This is true – there are consequences to everything, even things that seem completely harmless. Preserving your precious microbiome can be crucial to your long-term health. Using antibiotics wisely cuts down on resistance and saves their potency for when they are truly needed.

In 2018 record high funding to NIH was approved and attention to antibiotic resistance is growing rapidly. In fact, the CDC has issued an Antimicrobial Resistance Challenge for organizations to make formal commitments to tackle and monitor progress against antimicrobial resistance. November 12-18 is the United States Antibiotic Awareness week, and we should all pause to consider this looming threat.

There have been a lot of good things that have come out of our hardship, mainly in the form of being able to share our story in the hopes of helping others.  Parents Magazine picked up Pearl’s story (there’s just so much more) and I traveled to Washington 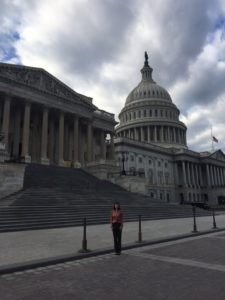 D.C. twice in 2018 to meet with members of Congress about the importance of antibiotic resistance, stewardship and mandated reporting of superbug infections (most of these infections aren’t even reported). I advocate locally as well, sharing our story with district offices. I am a Peggy Lillis Foundation Advocate, named after a wonderful woman who died from C. diff in just six days.

My name is Christina Fuhrman. As a mother and as a wife, as a survivor of one of the cruelest, most preventable diseases, I personally challenge you to simply ask yourself:

Do I have an antibiotic habit?