Back to all Posts
Peggy at the White House
Posted in Antibiotic Overuse, Patient Safety, Peggy, Peggy in the News, Press Coverage
by Christian

On Tuesday, June 2, I had the great privilege of representing the Peggy Lillis Foundation at the White House Forum on Antibiotic Stewardship. The forum brought together stakeholders from both the human and animal health constituencies involved in antibiotic stewardship (i.e. the development, promotion, and implementation of activities to ensure the responsible use of antibiotics). The forum included commitments from 150 companies, federal agencies, nonprofits and others, including PLF, to implement changes over the next 5 years to slow the emergence of resistant bacteria and prevent the spread of resistant infections. You can read our commitment here: PLF’s Letter to White House Forum on Antibiotic Stewardship

Being invited to the White House is a humbling experience, as is being one of only 3 patient/citizen representatives in a sea of doctors, scientists, executives, lobbyist and federal officials. Thankfully, I was joined by two stellar advocates, Victoria Nahum of the Safe Care Campaign and Carole Moss of Niles Project. I’m proud to say that each of took an opportunity to address the other attendees and worked the room to build connections for our work. And, despite the general intimidation factor of being at the White House, the overall atmosphere of the forum was very welcoming and collaborative.

The forum kicked off with remarks from HHS Secretary Sylvia Burwell and Agriculture Secretary Thomas Vilsack. Then Dr. Thomas Frieden, director of the Centers for Disease Control, framed the day with a discussion about the very real dangers of antibiotic resistant infections, including the harm and deaths resulting from them each year. Dr. Frieden mentioned my mother’s story as well as those of Niles Moss and Josh Nahum. You can watch that part of Dr. Frieden’s speech at the 17:20 mark.

Dr. Frieden then led a panel discussion that included leaders from Hospital Corporate of America, Genesis Healthcare, Walmart, Elanco Animal Health and Tyson Foods, each of which announced major commitments to fighting antibiotic resistance. You can read their commitments as well as others from across the stakeholder spectrum here: Antibiotic Stewardship Forum Commitments.

The rest of the day had two tracks. One for stakeholders in the human health sector and another for those interested in animal health. There was some grumbling about the division from a few participants but given the sheer number of people involved, it was the most logical way to separate us. The human health track included four  breakout sessions:

Each session started with a panel discussion moderated by an expert from the CDC and included four panelists. 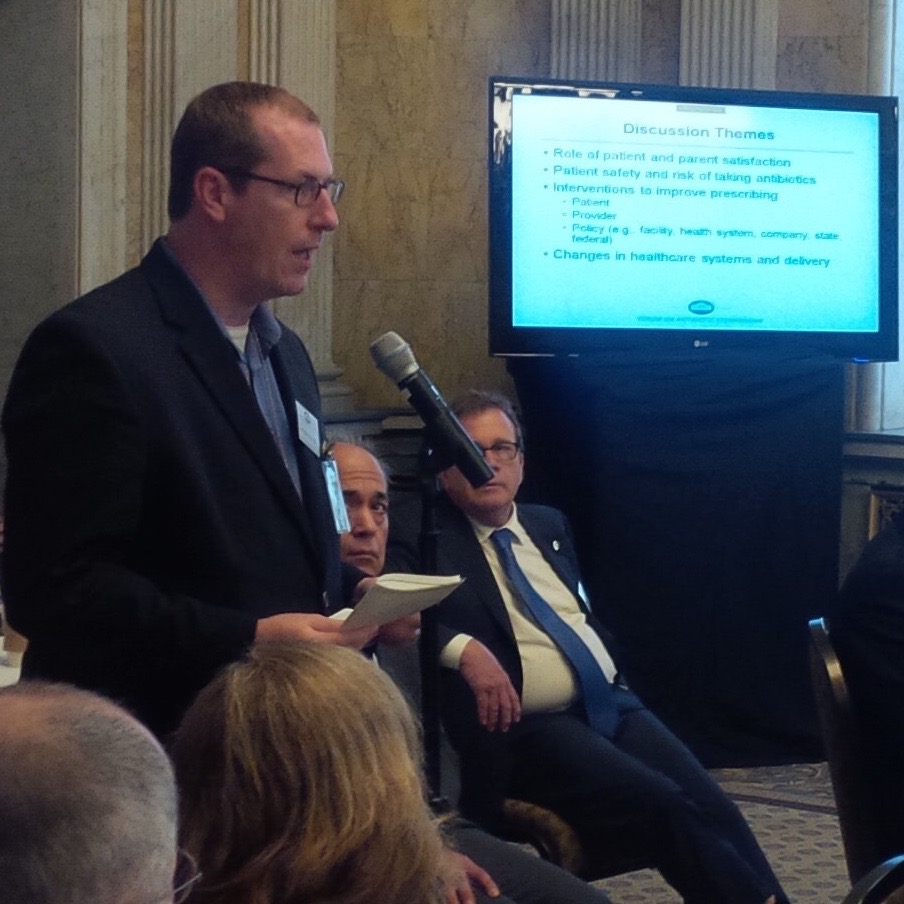 Following the panelists remarks, the floor was opened for other participants to speak and ask questions. Overall, each session was very lively and respectful. During the second session, I spoke about how Mom’s C. diff infection started with her getting a clindamycin prescription from her dentist and how the disconnected between medicine and dentistry is a dangerous gap. The panelists agreed, and I was then introduced to a senior leader at the American Dental Association! We’ve agreed to connect on how to educate dentists about C. diff. I made several other connections with host of leaders who are interested in collaborating with PLF.

In the coming weeks, the White House will release its plan to track the outcomes of the various commitments that participants made. I will blog about that when its available. Meanwhile, I’m excited to engage with other participants to stem and, ultimately, reverse the tide of antibiotic resistant infections.