“Disseminated intravascular coagulopathy and sepsis following total colectomy” is listed as the “immediate cause of death” on my mother, Peggy’s, death certificate. It is the technical phraseology for saying she died from sepsis due to an overwhelming Clostridium difficile infection (CDI). Essentially, the C. diff infection sent her immune system into overdrive and her blood began clotting in the small blood vessels. This denied blood and nutrients to her organs which then failed causing her death. So what is sepsis?

According to the Centers for Disease Control and Prevention (CDC), “Sepsis is the body’s extreme response to an infection. It is life-threatening, and without timely treatment, sepsis can rapidly cause tissue damage, organ failure, and 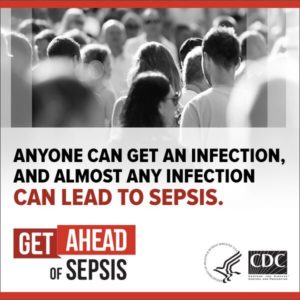 death.” For the clear majority of people who die from an infection, whether viral, bacterial or fungal, their immediate cause of death is sepsis. In other words, sepsis results from an infection that isn’t treated or doesn’t respond to treatment.

For comparison, a heart attack (myocardial infarction) usually occurs when a blood clot blocks blood flow to the heart. Without blood, tissue loses oxygen and dies. The blockage can be caused by a combination of high blood pressure, obesity, diabetes and smoking. When someone dies from a heart attack, the immediate cause is loss of blood to the heart muscle which causes it to stop beating thereby depriving the body of blood flow. The underlying causes can be varied.

Before my mother got sick, I’d never heard of C. diff, but I had heard of sepsis. Still, my perception of sepsis, which was largely informed by movies and television, was of someone unconscious if not comatose. In reality, while my mother was asking for a Diet Pepsi in the emergency room, the doctors were telling us that her kidneys were failing and her white blood cell count indicated she was in septic shock. I was not alone in my ignorance.

According to the Sepsis Alliance, only 58% of Americans have heard of sepsis. Worse, less than 1% can identify the symptoms and one-third believe it is contagious. The good news is that sepsis awareness has tripled over the past decade. This is largely due to the efforts of Sepsis Alliance and the Rory Staunton Foundation as well as public health officials most notably those at the Centers for Disease Control and Prevention.

Most C. diff deaths are sepsis deaths. While most people with a C. diff infection will survive, like a heart attack or stroke, sepsis is a medical emergency. The sooner a person with sepsis receives treatment, the greater their chances of surviving. That’s why Peggy Lillis Foundation is standing in solidarity with Sepsis Alliance, the Rory Staunton Foundation and the CDC to raise awareness during Sepsis Awareness month.

Throughout September, PLF will be helping our partners provide information on sepsis and you can join us. The CDC recently launched a new campaign, “Get Ahead of Sepsis”, to help healthcare providers and patients recognize it early. Watch campaign video, The Domino Effect:

Then visit the campaign’s home page to learn more and get involved.

Sepsis Alliance also has a dedicated campaign, “Say Sepsis Save Lives”, which has tons of easy to understand and share information.

The Rory Staunton Foundation is hosting a forum, “Keeping our Children Safe from Sepsis”, in Washington, DC on September 13. You can learn more on their website.

At least 1.5 million people each year in America get sepsis, and more than 250,000 people die as a result. Sepsis results from C. diff infection, pneumonia, fungal infections and even the flu. Knowing the risk factors and symptoms can save your or a loved one’s life. Please join Peggy and our partners in raising sepsis awareness throughout September.