Back to all Posts
Guest Blog: I Survived, and Others Will Too
Posted in C. Diff Stories, Fecal Transplants, Guest Blogs
by Kit 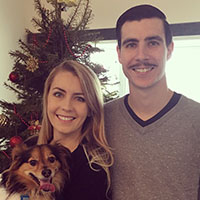 I shared my story a little over a year ago when I was still battling my C. diff infection and wanted to give an update. You can read my story here: peggyfoundation.org/story/ashley

I was 27 years old when I was first diagnosed with C. diff after a five-day Cipro antibiotic treatment for a UTI. About a week or so after finishing the medication I knew something was wrong. I was dismissed by several doctors telling me it was just a stomach flu and prescribed me strong antidiarrheal medications. I became very ill very quickly and was hospitalized. There, I was diagnosed properly with C. diff and IgA deficiency (which makes me prone to more infections). I was told it would be cured by a quick two-week Flagyl antibiotic, but I barely made it four days into treatment before I was hospitalized again for dehydration, sepsis, and atrial fibrillation. I was switched to vancomycin and did much better, though sadly I relapsed on all three treatments.

I kept being told by my infectious disease and gastrointestinal (GI) specialists that I was “young” and “would recover quickly,” however that was not the case at all. On my third treatment relapse, I found out I was pregnant. I was placed on a low dose of vancomycin throughout my entire pregnancy to ensure I would not relapse. I did have a healthy baby boy, however I had a rough pregnancy with stomach pains and urgency issues. After postpartum, I ended my ten-month low dose vancomycin treatment only to relapse in twelve days. I was put back on vancomycin and advised a fecal microbiota transplant (FMT) would be my best option.

I had my first FMT in April 2017 and relapsed five days later. I was hospitalized again for seven days because not only was I battling C. diff, but also the Norwalk virus. My GI decided on what he considered to be the “most aggressive treatment” of Dificid followed by my second FMT. I had my second FMT in May 2017 and have been C. diff free ever since. Sadly, I have thought I was relapsing a few times only to find out that I suffer from severe Post Infectious Irritable Bowel Syndrome (PI-IBS) and food intolerances. I have a very restricted diet post C. diff and continue to need extensive follow up care. I am also on two medications to help with daily pain and incontinence issues. I also take probiotics to help reestablish the good bacteria.

I was sick in total for 22 months with six relapses/recurrences. I lost twenty-three pounds and heavily relied on my husband for help with daily activities. I also ended up leaving my job during the infection and recovery as I did not have the strength to endure eight-hour work days.

This infection is scary, and without the message boards and groups on this site I don’t know how I would have made it through. There isn’t enough awareness about C. diff and even less on C. diff recovery. I am very thankful that this site was available to me for information and guidance. Now, I am four months post-C. diff and back to work full time with a one year old. Learning how to be thankful for every day no matter what form it comes in. I do suffer anxiety and possible PTSD from the experience. But, I survived. And others will too, you just need to arm yourself with knowledge and a good support system.