In the United States, the right to prescribe medicines is restricted to a small percentage of the population. Approximately, 1.2 million Americans are licensed to do so. The vast majority of these (908,508) are medical doctors in primary or specialty care. The second largest group (210,030) is dentists. As the dangers of using painkillers and antibiotics at both the individual and societal level have grown, awareness efforts and interventions have largely focused on physicians and patients. This is despite the fact that dentists prescribe 12 percent of all immediate-release opioids 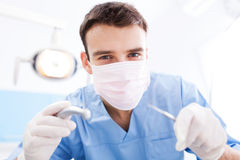 and 10 percent of all antibiotics. While our news programs are popular media are rife with stories and depictions of the harm caused by painkiller addiction and abuse, the same cannot be said for antibiotics.

Our family learned that antibiotics might be just as harmful as painkillers in the worst way possible. On April 21, 2010, my mother Peggy died from a clostridium difficile infection (CDI) that was precipitated by her taking clindamycin prescribed by her dentist. It’s hard to know when our mother was colonized with C. diff spores but the destruction of her good gut bacteria by clindamycin led to her aggressive CDI. My mother died less than 10 days after receiving that prescription from her dentist. Prior to her illness and death, we had never heard of C. diff. Had you asked us if an antibiotic prescribed by your dentist could lead to your death, we’d have assumed you were kidding or insane.

But it did. And thousands of Americans are sickened by C. diff every year following antibiotic prescriptions from their dentists. In Rochester, New York, Jill also got C. diff after taking clindamycin for a tooth infection. She describes her C. diff symptoms as feeling “like razor blades were in [her] stomach. The pain was worse than childbirth or kidney stones.” Over the next three months, Jill was in and out of the hospital without being cured. Desperate, she signed up for a clinical trial that also failed to resolve her symptoms.

In the Midwest, both Tonia and Nina suffered from C. diff infections for months after receiving antibiotics from their dentists. Tonia battled C. diff for over 9 months and Nina struggled for 5 months before seeking a fecal microbiota transplant (FMT). In Virginia, despite having been “cured” for over four years, Carol continues to struggle with gastrointestinal issues following a bout with C. diff that started with antibiotics for a tooth abscess. Thankfully, they are all still alive.

This summer, the Centers for Disease Control & Prevention (CDC) and the Organization for Safety, Asepsis, and Prevention (OSAP) took an important step to close the gap between dentists and other prescribers. The two groups collaborated on an article in The Journal of the American Dental Association (JADA), concerning responsible antibiotic use in dentistry. The article notes studies estimated that 30 percent of all outpatient antibiotics prescribed by physicians are unnecessary. Though barriers existing to collecting details on dentist prescribing habits, the authors are rightly concerned that a similar amount of unnecessary antibiotic prescribing occurs.

Despite the more than 25 million prescriptions for antibiotics written by dentists annually, there are few instances where these drugs would be warranted. Further, as the article notes, “there are no national guidelines for treatment of specific dental infections, so dental care providers have to decide independently when an antibiotic is indicated, which antibiotic to use, and what dose and duration to prescribe.”

This is further exacerbated by the lack of a clear feedback loop to dentists form patients who suffer dangerous side effects from their antibiotic treatments. The onset of CDI symptoms can be days or weeks after the antibiotics are taken. My mother never connected the diarrhea she experienced to the clindamycin she took for two reasons. First, and most significantly, she had never heard of clostridium difficile. In fact, only 23% of Americans even know that C. diff exists. Second, she was several days into her course of antibiotics when her diarrhea began. Mom took the clindamycin up until she was admitted to the hospital never knowing it was connected. Rather than call her dentist, Mom did what most people do when they have diarrhea. She called her medical doctor. We’ve heard similar stories from many people with who get prescribed an antibiotic by their dentist and end up seeing a medical doctor for their C. diff symptoms.

I am pleased to see that the JADA article by CDC and OSAP raising important issues for antibiotic prescribing in dentistry. The authors provide a variety of clinical tips for dentists to incorporate into their practices, including:

The article contains many more tips and resources for dentists including information on the importance of stewardship practices to combat antibiotic resistance.

For me, the article misses the mark in one important way. It doesn’t challenge dentists to engage in shared decision-making and truly informed consent. Given the lack of established guidelines and best practices for antibiotic use in dentistry, most prescribing is not evidence-based. But patients are unlikely to know this. Therefore, it’s incumbent on dentists to engage in honest and frank dialogue with their patients when prescribing antibiotics. Patients should be told about the perceived necessity of the drug and what alternatives exist. They should be informed of the likely outcome if antibiotics aren’t prescribed as well as the potentially harmful side effects – including a C. diff infection – that come with antibiotic use. Where possible, patients should also be offered a choice of a narrow or broad-spectrum antibiotic.  Both professionals and patients should push for more and better research into the use of antibiotic in dentistry.

My mother went to the same dentist for over 20 years. He treated many people in our family. I doubt that he intended to cause her any harm when he prescribed her clindamycin. But, my mother had enormous trust in her dentist and assumed – as most Americans probably do – that if he gave her an antibiotic she needed it. She also assumed – as most do – that his prescribing practices were based on hard science, not professional habit. Mom was not allergic to penicillin so a less powerful antibiotic could have been offered. With all the information at hand, she might have chosen a different course of treatment, including allowing her healthy immune system could tackle a minor, localized infection. What I’m confident about is that had my mother been warned about C. diff, she would have sought medical attention sooner. While I can’t be certain, it’s very possible that had her dentist warned her that C. diff was a potentially deadly side effect of clindamycin; her outcome would have been different.